The Michigan Department of Natural Resources has stepped up its surveillance and information efforts in the wake of the Upper Peninsula’s first case of chronic wasting disease being confirmed Oct. 18 from Dickinson County’s Waucedah Township. 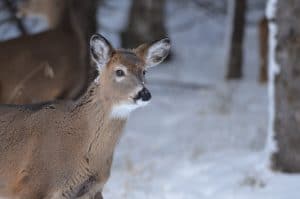 A 4-year-old doe killed in September on a deer damage shooting permit tested positive for chronic wasting disease. The deer was shot on an agricultural farm about 4 miles from the Michigan-Wisconsin border, though there is no information available currently to determine whether the deer came from Wisconsin.

“The increased surveillance measures are being taken to determine the extent chronic wasting disease is present in Waucedah Township and the surrounding area,” said Russ Mason, DNR Wildlife Division chief. “We are also testing deer from a wider geographic area to include deer making seasonal movements and to keep watch for potential cases of this fatal deer disease in other parts of the region.”

The DNR has enhanced its CWD information efforts to help raise awareness about what the presence of the disease means for hunters and others, and to answer important questions posed by the public. A toolkit with printable brochures, ads, photos and presentations, along with maps, testing information and surveillance statistics, is available at michigan.gov/cwd.

“It is very important to rely on facts in learning about CWD,” said John Pepin, DNR deputy public information officer. “The latest developments are being updated regularly on the Michigan Emerging Disease Issues webpage (michigan.gov/cwd) maintained by the state. The more folks become informed about the disease, the better equipped they will be to reject misinformation. We need hunters, community members and others to help spread the true facts about CWD.”

Chronic wasting disease is a fatal nervous system disease found in animals from the family Cervidae, including deer, moose and elk. The disease attacks the brain of infected animals, creating small lesions, which result in neurologic symptoms. The disease is always fatal in animals that contract it.

To date, there have been no reported cases of CWD infection in humans. However, the Centers for Disease Control and Prevention and the World Health Organization recommend the meat of infected animals should not be eaten.

No plans are in place to ban or restrict deer baiting this year. A decision on supplemental winter feeding will be made once surveillance results are in.

Since 2015, the DNR has been conducting active surveillance along the Michigan-Wisconsin border. This surveillance effort detected the CWD-positive deer.

“We set up this surveillance because chronic wasting disease has been detected in Wisconsin captive and free-ranging deer within 50 miles of the Upper Peninsula,” said Craig Albright, the DNR wildlife division’s U.P. field operations manager. “We wanted to be watchful for the disease in Michigan border counties because early results of our ongoing deer movement study show some deer make movements across the state border.”

Deer collected through deer damage shooting permits, road kills and hunter submissions have been tested in the Michigan border counties of Gogebic, Iron, Dickinson and Menominee.

Prior to the CWD-positive deer confirmation from Dickinson County, the DNR had set a goal of testing a minimum of 600 deer heads from these four border counties for 2018.

Statewide, so far this year, the DNR has tested 37 percent of its 15,635-deer goal for 2018. There has been a total of 10 CWD-positive cases in Michigan this year, including one each from Dickinson, Ionia, Jackson and Kent counties, and six from Montcalm County.

A roughly 10-mile-radius core surveillance area – encompassing 661 square miles – has been created, centered on Waucedah Township. Within this zone, the DNR is working to determine whether CWD exists in areas around the doe that tested positive.

Baiting for deer has not been restricted in this area for 2018. Deer check is voluntary and encouraged. No in-state travel restrictions are currently in place. However, the DNR recommends limited carcass transport and proper disposal.

The DNR hopes to collect a minimum of 600 deer heads for testing from this core surveillance area. Through this year’s previous border surveillance efforts, 358 of those heads already have been gathered and tested.

The boundary of the core area was set using several roadways. The zone is bordered by U.S. Highway 2, M-95 and the Menominee River on the west; M-69 from Randville to Bark River on the north and U.S. Highway 41/U.S. 2 and Menominee County Road G18 on the south.

The Wisconsin Department of Natural Resources, given the recent CWD confirmation in Dickinson County, will focus its own CWD surveillance testing effort, opposite the U.P.’s core surveillance area, on the Wisconsin side of the Menominee River in Marinette County.

As in the core area, baiting for deer has not been restricted in the expanded surveillance area for 2018. Deer check is voluntary. No in-state travel restrictions are currently in place. However, the DNR recommends limited carcass transport and proper disposal.

“Because of the seasonal movements of deer in the Upper Peninsula, we wanted to test some deer from this larger area outside the core to see if CWD is present,” said Terry Minzey, U.P. regional wildlife supervisor. “The boundary we created is based on previous patterns of regional deer movements revealed through deer tagging studies from 1989-2006.”

Within this roughly 75-mile-radius expanded CWD surveillance area, the DNR has set a goal of collecting at least 300 heads for testing. That goal already has been exceeded with 330 heads tested so far this year.

The DNR will continue to test deer heads.

“Any hunter who is concerned about CWD is welcome to have their deer tested by going to one of the check stations or drop boxes,” Albright said.

Hunters should take precautions to limit transport of deer carcasses. There are also laws governing bringing deer, or some deer parts, into Michigan from out of state.

In addition, deer carcasses should be disposed of properly in a landfill, or through home garbage pick-up. The DNR will have dumpsters available at DNR offices where carcasses may be disposed of.

A deer that is shot in an area infected with CWD should never be disposed of on the landscape in uninfected areas. At no time should the head, spine or other restricted parts of a deer killed in a CWD-infected area be moved, or disposed of, outside of that area.

If it is necessary to bury a carcass, do so as close to the kill site as possible, and deep enough to prevent scavengers from digging it up. This method does not prevent future infections at that location but minimizes the chance of moving CWD prions across the landscape to areas that have not been infected.

Within the core area, the DNR will be contacting landowners who own at least 5 acres of land and are located within 2 miles of the farm where the CWD-positive deer was shot. These landowners will be offered free disease control permits to shoot deer on their properties for testing.

There are a few options available to hunters and others who find a dead or visibly sick deer.

The first involves accurately documenting the location of the animal and the time and date that it was sighted. This information can be reported to the nearest DNR office or, after business hours, to the DNR’s Report All Poaching hotline (1-800-292-7800).

“If the deer is essentially immobile, it can be put down by a DNR conservation officer,” Stewart said. “If the animal is still mobile, a site visit will depend on staff availability, but is unlikely, especially if a long time has passed since observing the deer.”

A hunter also can harvest a sickly deer as legal game, based on the stipulations available to them on their hunting license and the season. If the deer tests positive for CWD, a replacement license will be provided.

Third, if a photograph is available, getting written permission from a DNR biologist can serve as authorization to harvest the animal. Note that the entire deer will have to be submitted to the DNR, but a license does not have to be used to take this animal.

Several DNR deer check stations are located within the core and expanded surveillance areas. In addition, there are self-service drop boxes, which will be in place by Nov. 6, available at DNR offices in some areas, including Escanaba, Norway, Crystal Falls, Stephenson, Felch, Gwinn and Marquette. Two meat processors, located in Crystal Falls and Spalding, will also have drop boxes.

Check station workers will remove deer heads. Hunters may keep the antlers and the meat. For self-service, hunters can remove the head at the base of the skull. Once a deer head is submitted for testing, it will take up to 14 business days to receive results. Hunters with an infected deer will be notified by the DNR wildlife disease laboratory. Otherwise, results will be posted online at michigan.gov/dnrlab.

“Michigan’s hunters will play a big role in combatting this disease in the Upper Peninsula,” Mason said. “By continuing to hunt, learning the facts about CWD, getting deer heads tested, limiting carcass transport and disposing of deer carcasses properly, hunters and the general public will help us advance greatly our DNR surveillance and information efforts.”