Aaron Causey of Riverside, Ala., has been all over the world to hunt, but he considers none of his hunts more special than the Buckmasters Life Hunt Classic last week at Sedgefields Plantation. 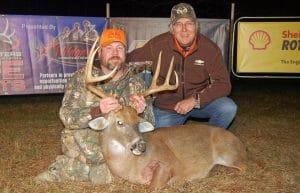 Causey’s world changed in 2011 when an improvised explosive device (IED) left him clinging to life in Afghanistan. A member of the military bomb squad, Causey had to undergo more than 40 surgeries. He lost both legs above the knees. He has recovered to the point that he has resumed his favorite pastime and joined in the Buckmasters hunt, which hosts wounded veterans and others with disabling injuries or illnesses.

“This is an amazing hunt,” Causey said. “It’s not just about the deer. It’s about the people you’re here with. It’s talking to people and getting to know everybody, especially watching these kids come out here and bring home a deer. Oh, that’s amazing. And I’m an avid hunter. I’ve hunted Africa, Montana and Wyoming.”

Causey also managed to bag one of the largest bucks, an eight-point, taken during the Buckmasters event.

Causey’s buck played hide-and-seek for a while before he committed to coming into the field where the blind was erected.

“We watched four does probably for about three hours,” Causey said. “At about 3 o’clock, this massive buck came into the field, looked around and disappeared. He came back, stared straight at us and disappeared again. He was about 250 yards at the first sighting and about 225 yards the second sighting. The first sighting, it was too tight of a shot between the trees, and I wasn’t going to take a chance.”

A couple of hours later, does were still in the field when several bucks started to file into the area. A pair of six-points came in first, followed by an eight-point. Causey and his guide were about ready to take the eight-point when they had a change of mind.

“My guide said, ‘Wait a minute. Let me scan the field with my binoculars,’” Causey said. “Then he said, ‘Look to the right.’ I looked out and there was that big boy coming back in.”

Causey and his crew had to wait for the big buck to get a little closer and get in a position where he was comfortable with the shot.

“He kept walking toward us and wouldn’t give me a broadside,” Causey said. “He finally kept coming and gave me a broadside. He was 120 (yards) when I shot him. He went about 35 yards into the woods. The guide immediately went out in the field to check for blood. It was pretty wet back there, so we went and got the (blood-trailing) dog. The dog went up the field and he was already on the deer before anybody had a clue. He went straight to my deer.”

One of the first deer taken at Sedgefields last week was by McKenzie Clark, who is dealing with giant axonal neuropathy. It also happened to be her first deer ever, which left her dad, Shannon, a little teary eyed.

Clark, who is from Woodville, Ala., and crew had been sitting on a green field for about 2½ hours before any deer showed up.

“We saw about six does,” she said. “The buck I shot came in about 5 o’clock. My guide, Jay (Hatcher), said since it’s your first one you can shoot or you can wait. I said, ‘I’m gonna shoot it. I’m not gonna wait.’

“I had the gun up, looking for the deer. But I was shaking. I told them they were going to have to give me just a minute. I found the deer in the scope and squeezed the trigger real slow.”

Her dad will now have to look for ways for McKenzie to continue to hunt.

During the photo session back at the camp, Shannon had to wipe away a few tears.

“That one is more special than any I’ve ever killed, and I’ve been hunting since I was 14,” he said. “My first buck was a spike, so she really outdid me on that. I think I’ve got a hunting partner for life. I was just happy. It doesn’t get any better than that.”

This wasn’t the first Buckmasters Life Hunt Classic for Brandi McCormack of Northport. She had bagged a nice buck several years ago but requested a return trip.

McCormack, a paraplegic who was injured in a fall from a balcony, got treated to some deer-camp shenanigans on her hunt. She had previously worked for her guide, Robert Almon, and he knew she was a good sport.

“There were so many deer in the field, you couldn’t even count them,” McCormack said. “Halfway across the field you’d lose count. I’ve never seen anything like it. It was unreal. And seven or eight were bucks. We had one deer right in front of us chewing on a vine, looking straight at me.”

Almon recounted the episode, saying, “We’re in a ground blind, and a group of does fed up to within 10 feet from us. There was one right in front chewing on some leaves. She looked up straight into the blind, and Brandi said, ‘I think she’s looking straight into my soul.’ The buck we want to kill is 75 yards away standing broadside, and we can’t take a shot. We can’t move an inch. Finally, a little nub buck came in and ran the does out from in front of the blind, so we could get the gun up.”

When the does finally moved, McCormack said she remained calm and practiced her breathing before she put the crosshairs on the buck.

When she squeezed the trigger, the buck bolted. That’s when Almon and the camera man got a little mischievous.

“I was afraid I missed, but Robert said he was sure I hit it,” McCormack said. “They went out and started looking for blood. I couldn’t hear their conversation. They got further and further away. Then they started hanging their heads low, shaking their heads. I was sick to my stomach. They came back to the blind and said, ‘Okay, we’re going to be quiet and see if anything else comes out.’ I said ‘Huh-uh.’ Then they told me they found the deer. They got me. They got me good.”

A couple of baseball celebrities made return visits to the Classic. Relief pitcher David Robertson from Tuscaloosa, who just signed a two-year contract with the Philadelphia Phillies, and Craig Kimbrel of Huntsville, who was a relief pitcher with the World Champion Boston Red Sox last season, showed up to help the Classic participants celebrate being in the great outdoors.

This year’s event was particularly poignant for Kimbrel, who missed last year’s Classic because of his daughter, Lydia Joy, who was born with heart defects.

Lydia Joy has had a couple of surgeries already and another is planned soon.

“Going through some difficult times with my daughter and spending a lot of time in the hospital gives me a new perspective,” said Kimbrel, who is exploring the free-agent market after completing his Red Sox contract. “I’ve been coming for quite a few years, and I get to hear these families’ stories about the struggles they go through. And then I go through something similar last year. It was tough. You learn from it. You grow from it. We got a beautiful daughter out of everything we went through. Now she’s doing great. She acts like surgery is no big deal.