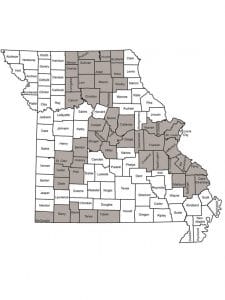 JEFFERSON CITY, Mo. – The Missouri Department of Conservation (MDC) wants deer hunters to know that it is offering free chronic-wasting-disease (CWD) sampling and testing of deer harvested anywhere in the state throughout the entire deer hunting season – Sept. 15 through Jan. 15, 2019. The sampling is voluntary and hunters can also get free test results for their deer.

MDC asks hunters to Telecheck their deer before taking them to a CWD sampling location. Hunters can bring the entire deer — preferably field dressed — or the head with at least 6 inches of the neck in place. Heads that have the cape removed for taxidermy can also be sampled.

CWD test results can take up to four weeks from the time of sample submission. Hunters can get test results for their CWD-sampled deer online at mdc.mo.gov/CWDTestResults.

MDC will again conduct mandatory CWD sampling in 31 of the 48 counties of its CWD Management Zone during the opening weekend of the fall firearms deer season, Nov. 10 and 11. The counties include new ones added to the CWD Management Zone, counties with previous CWD positives, and counties very near previous positives.